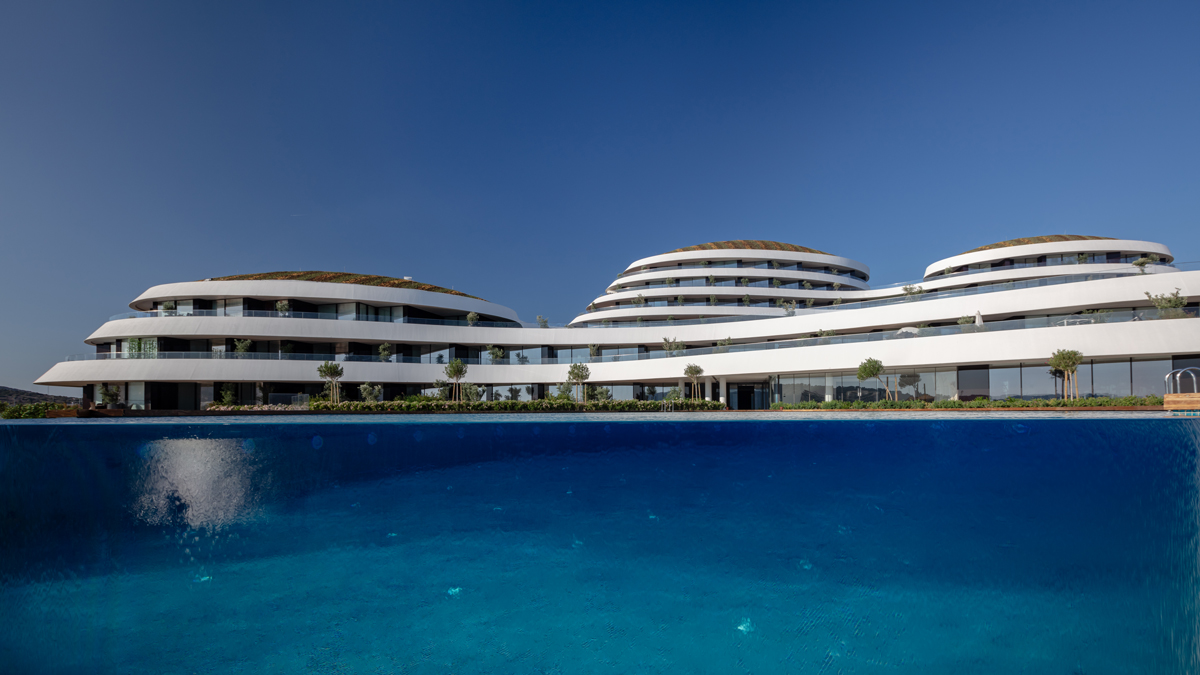 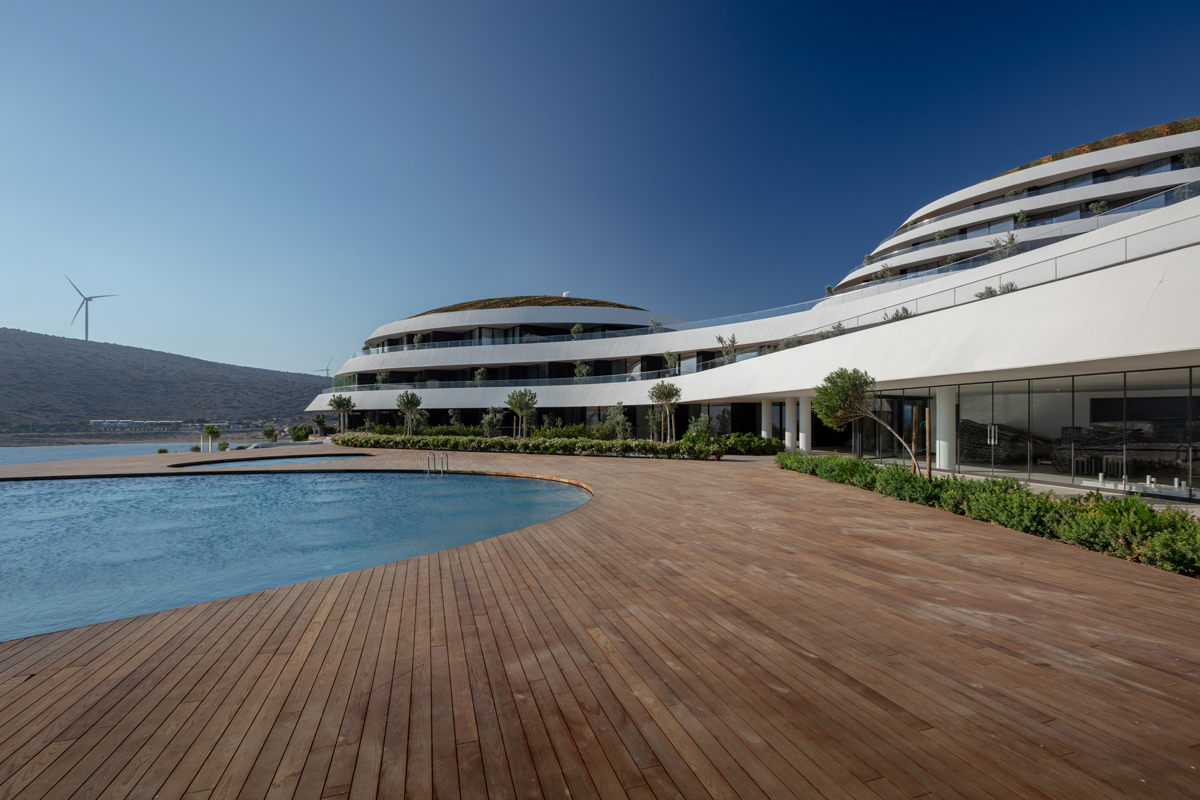 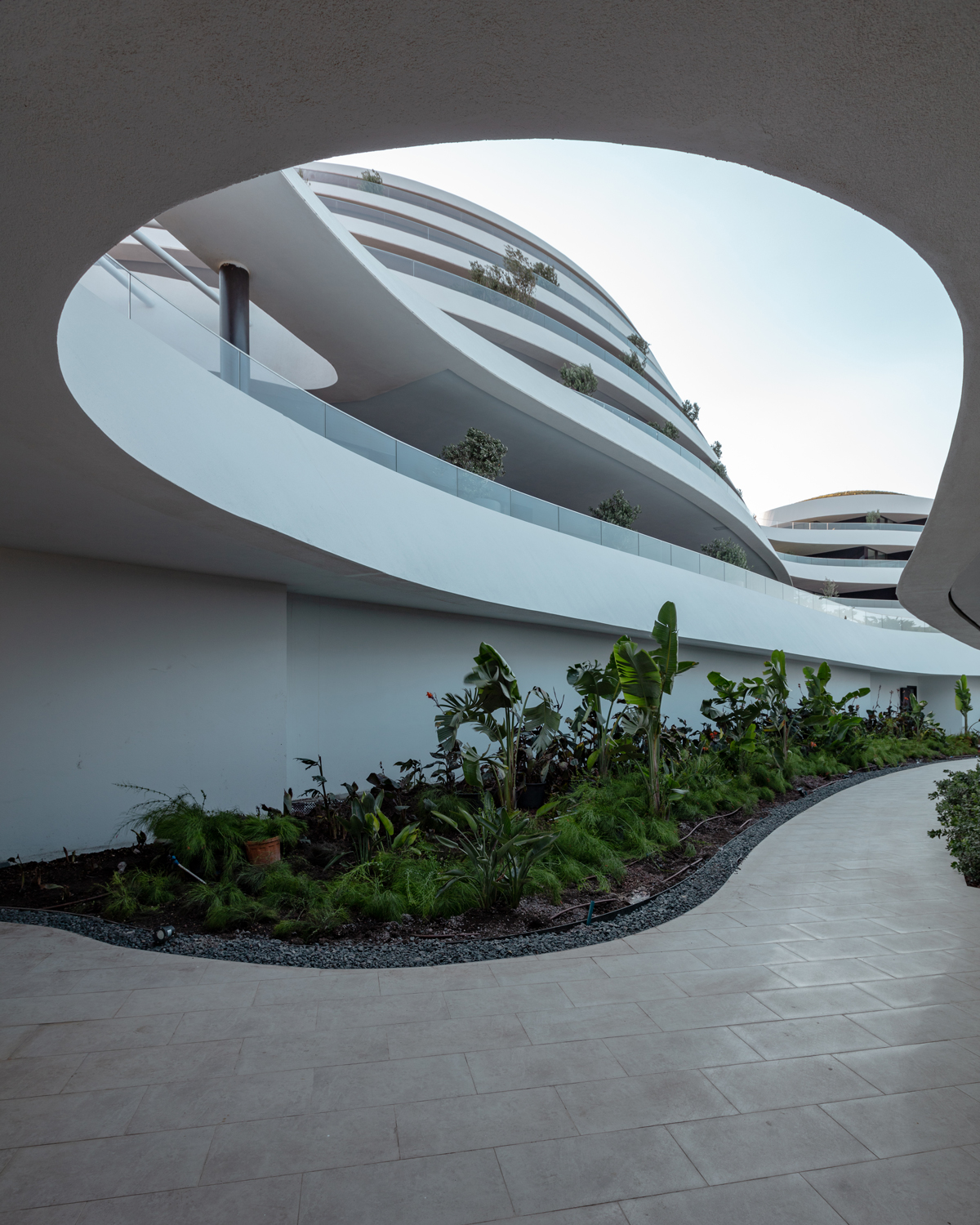 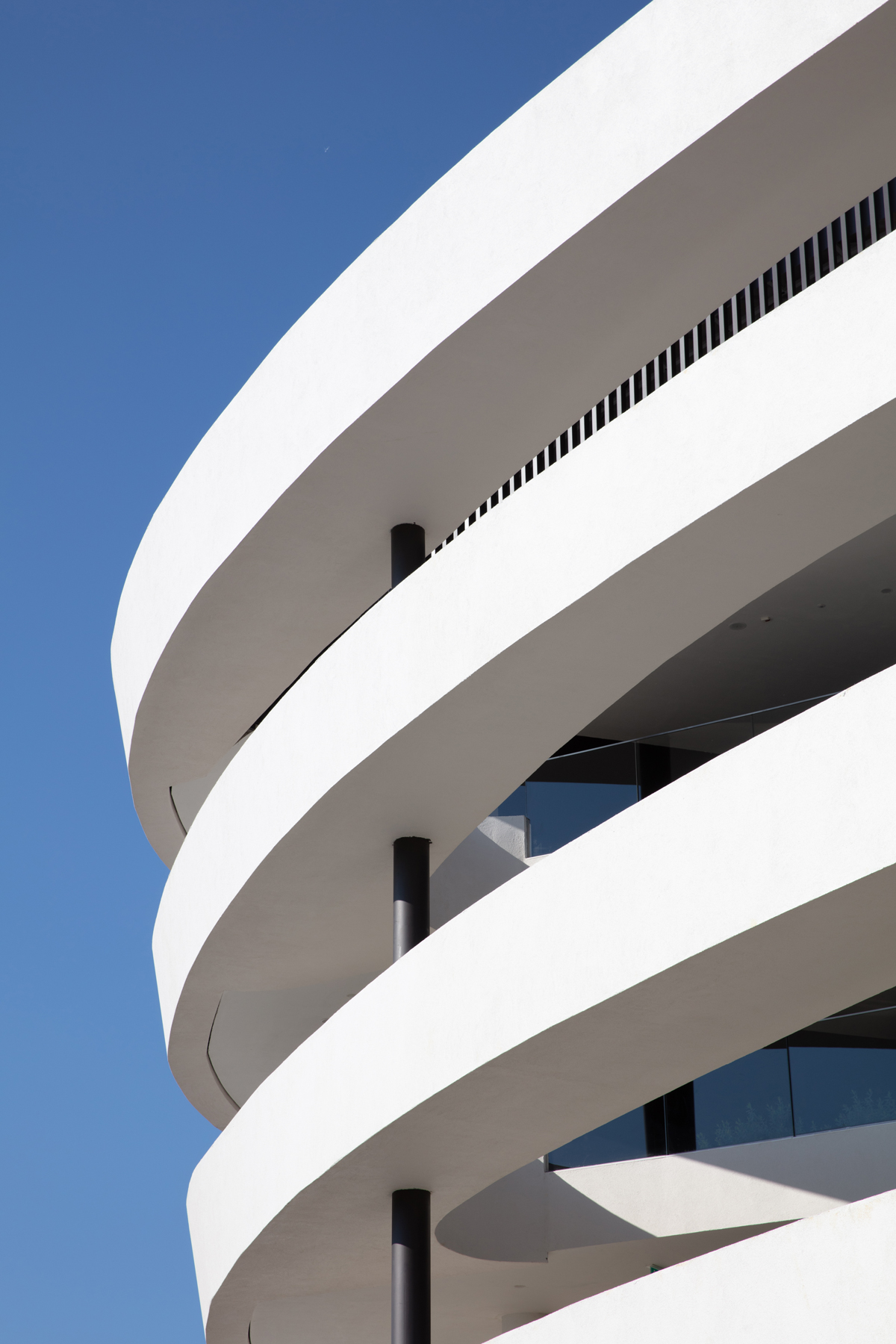 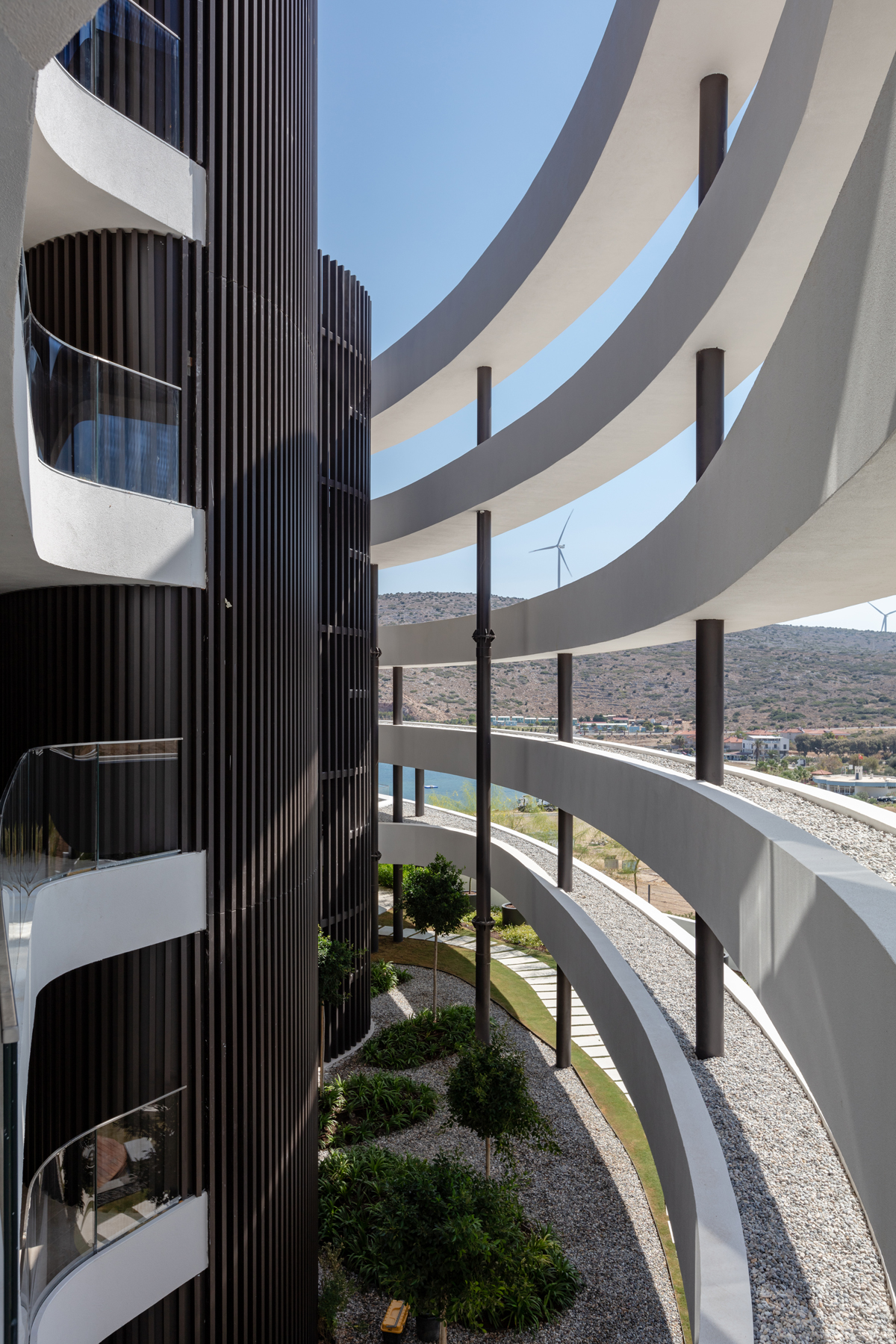 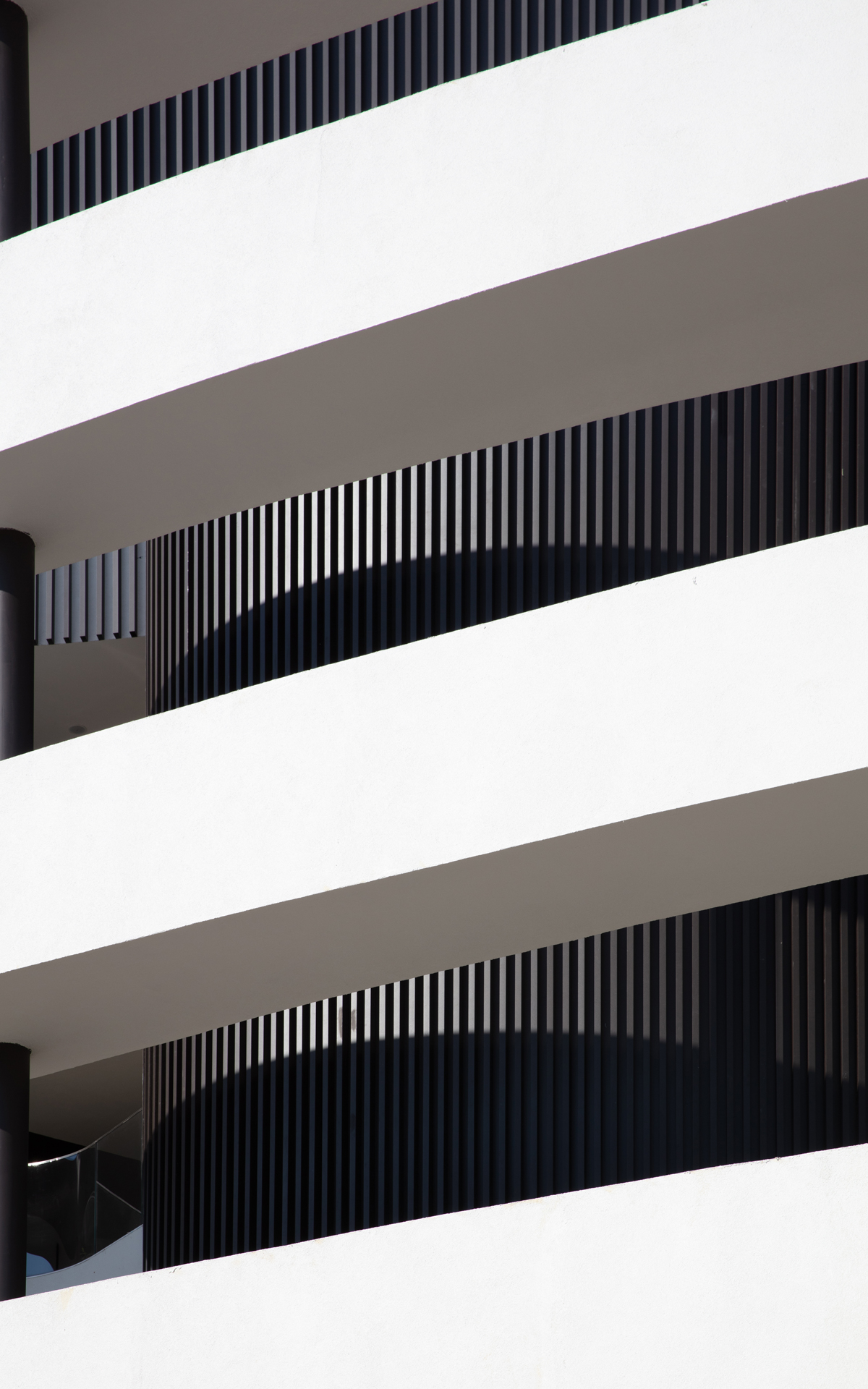 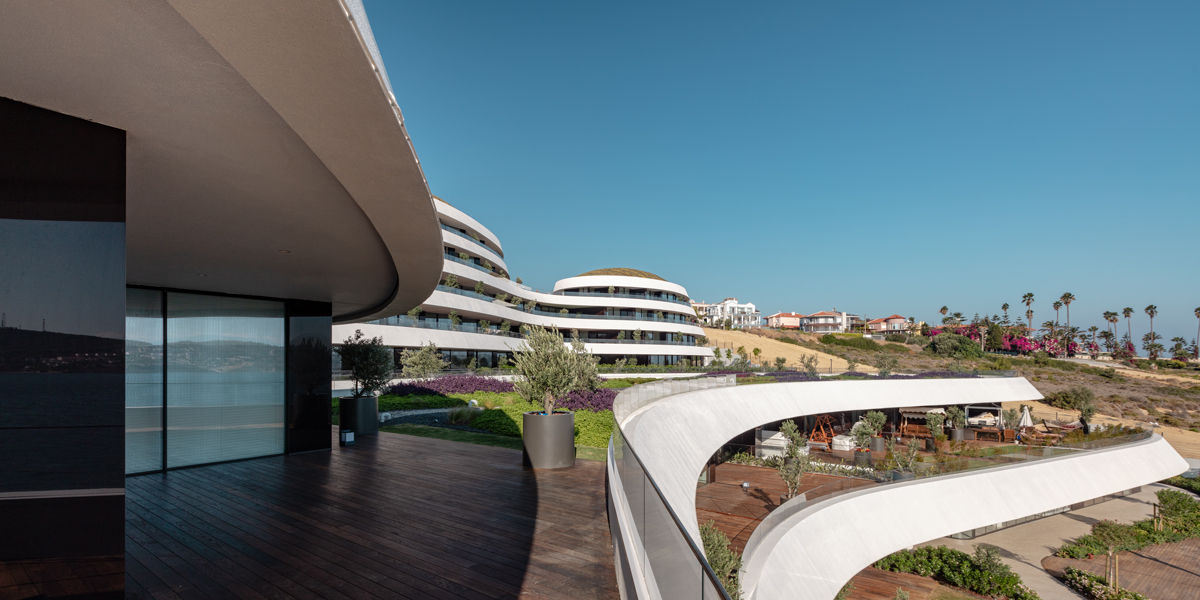 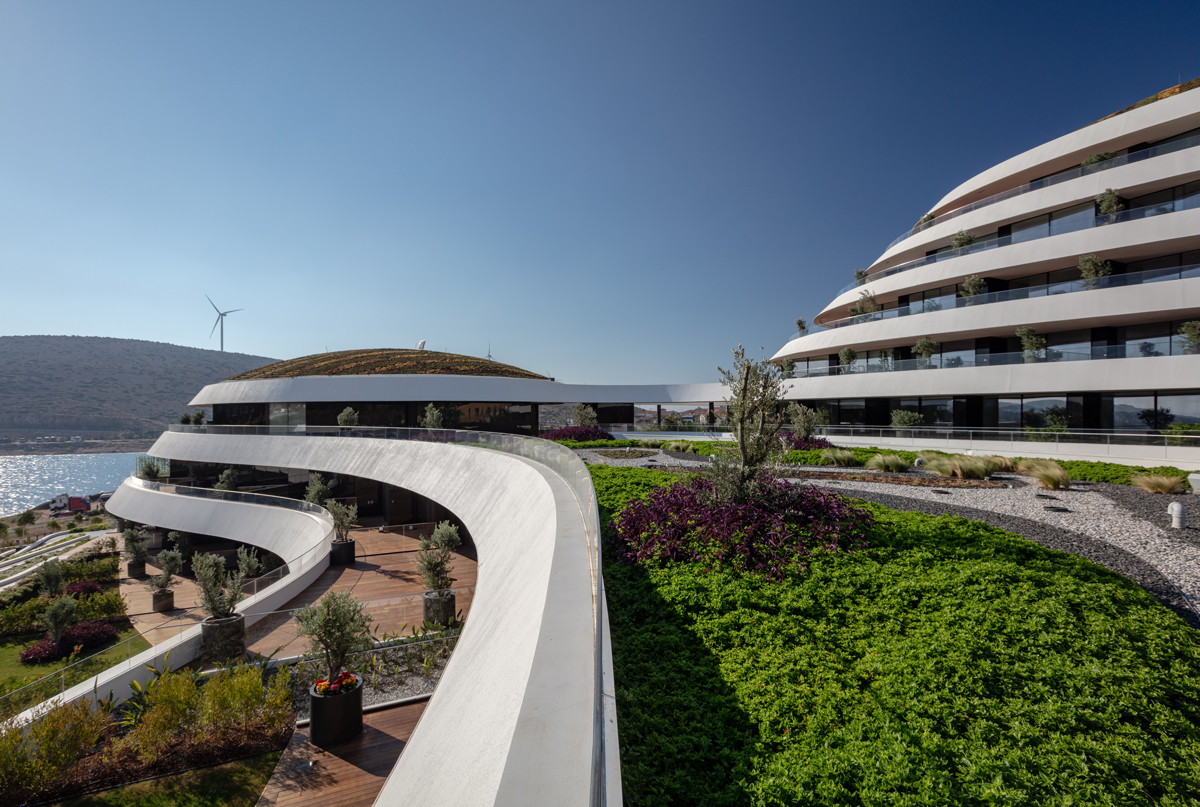 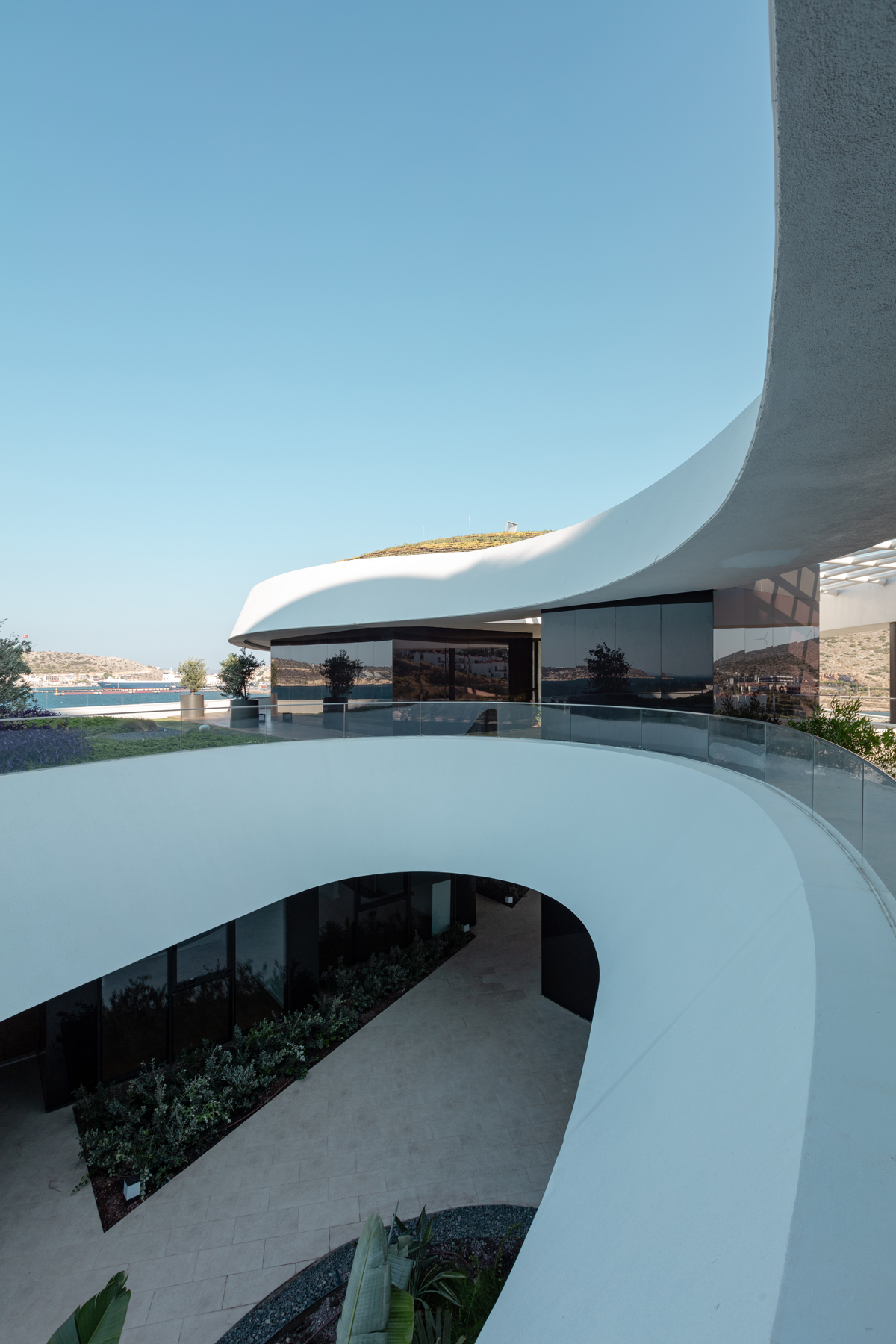 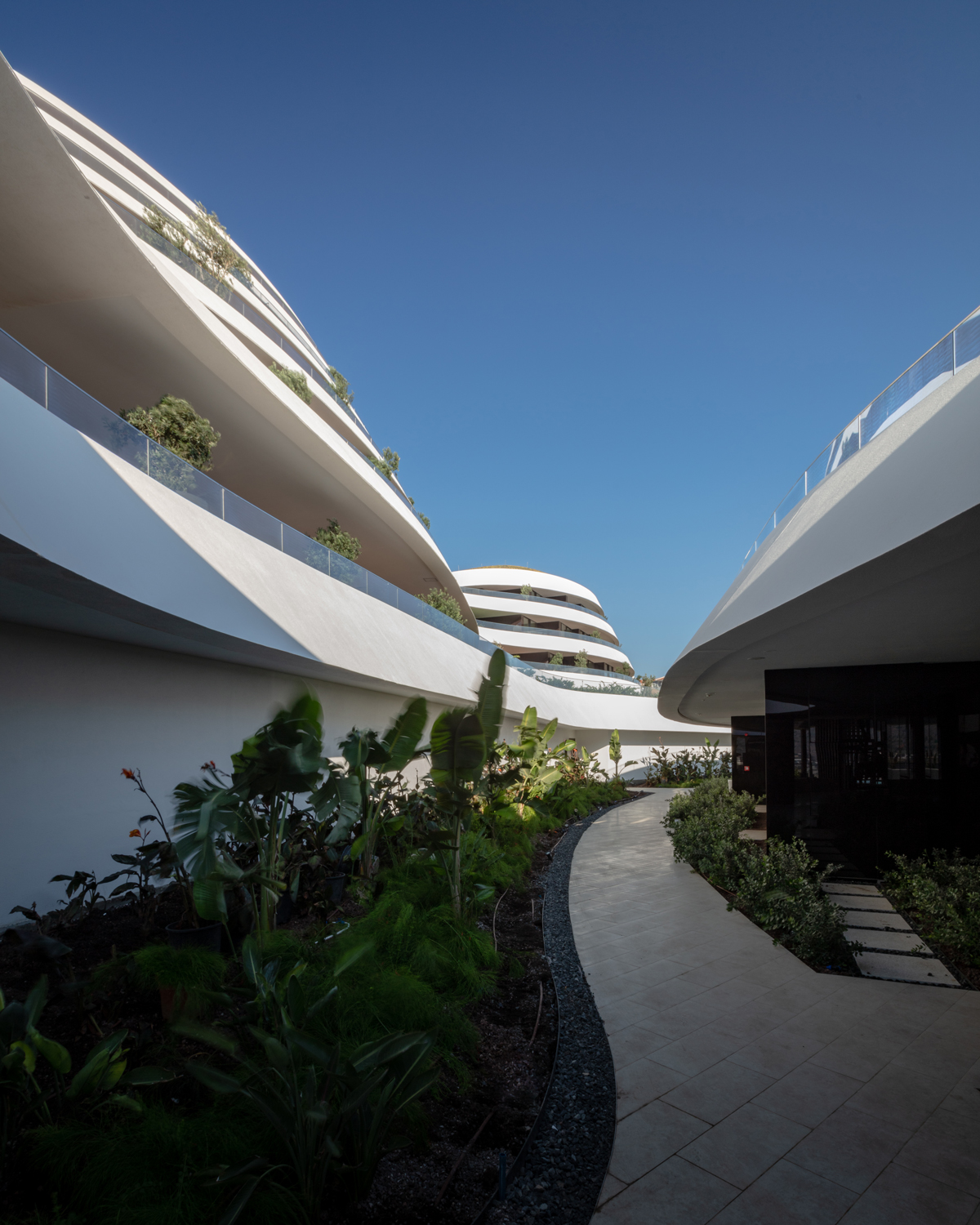 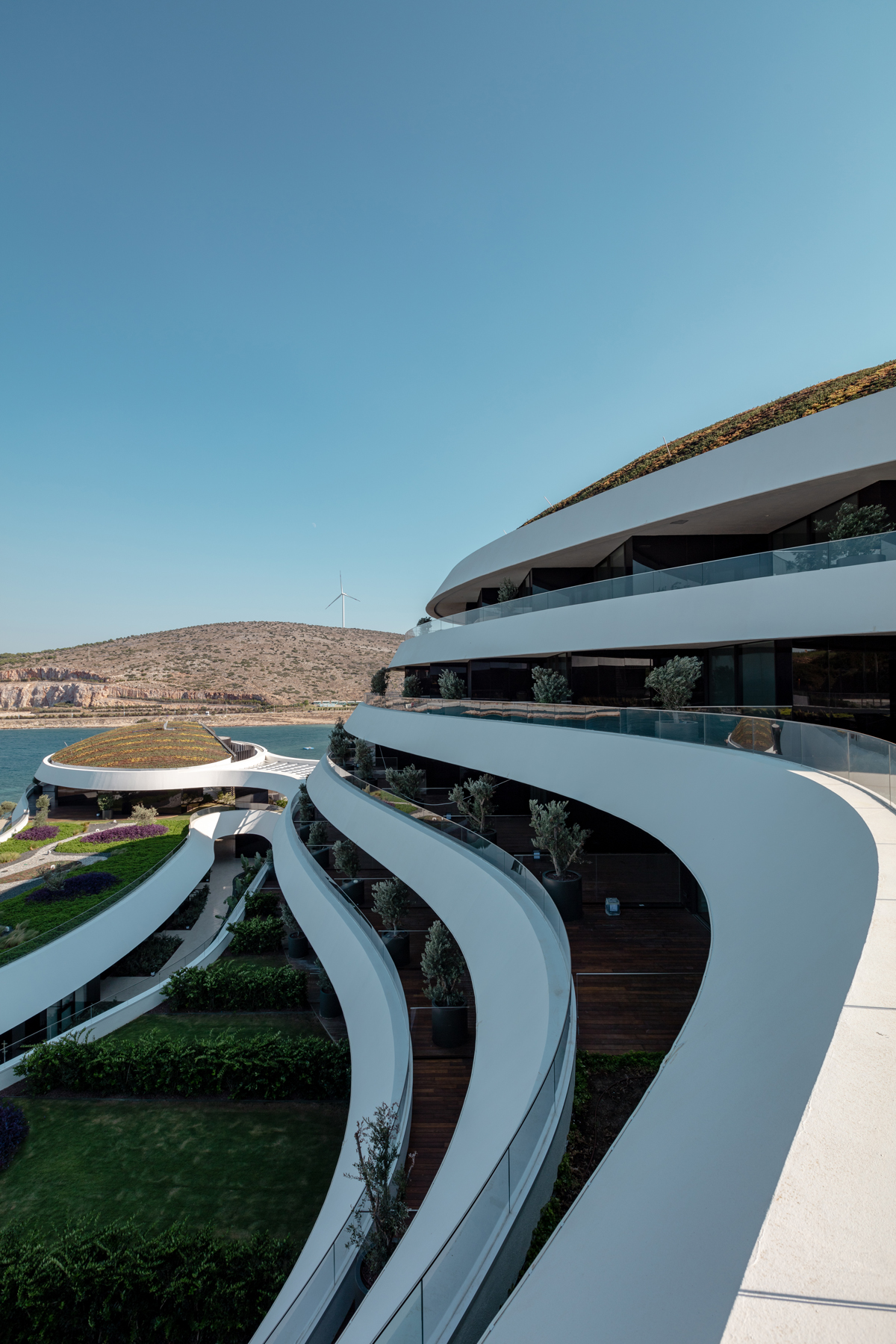 For the brief, the investor group wanted a project with a strong symbolic influence that reflected their innovative perspective. The project was wanted to be used as a hotel and residence where each and every unit would have a seamless sea view. Within the scope of the project which will be made up of different sizes of hotel and residence units , it was also requested for the project to be considered together with functions such as lounge, sports and health . The project consists of 40 rooms, 18 suits and 12 special units. A thermal curing area connected  to the indoor pool area has also been added to the project due to the project site being located in a thermal water region .

The project location facing Çeşme needed an approach that would reveal the potentials it held.

The inspiration is the landscape effect created by the nested hills in the nature to create our topography. These three-hilled structures form their own topography, melting into the silhouette on the high sloping land, without directly depicting a direction. With the geometry of three seperate hill masses  sitting at different levels, the structural massive affect has been broken and the northward positioning of the structure is softened by the elliptical geometry. The project takes it’s name from this form language.

Çeşme is one of Turkey’s most important touristic regions. The region covers a wide geographical area. Facing the Folkart Hills project site on the eastern side is the Çeşme harbor and an old stone quarry ( used as harbor ) , located behind the harbor is the Çeşme city center and yacht marina.  Sea view is to the North and nort-west direction. The project area is in a high sloped area in the east-west direction. Perpendicular to the sea, an elevation difference of 42 meters is existent. Project site is located on the 25 meter portion of this slope.

We created surprising viewpoints by changing the viewpoint of each unit. The project holds a dynamic planning conception in different levels and perspectives. Inner courtyards with main circulation areas enrich the outdoor experience. At the same time, the gardens of the units with seamless sea views provided directly meeting the water with a glance at the sea, as if on a boat, and the feeling of being private was strengthened. These inner courtyards also play an important role on climatization by taking in the northern winds of the region. In addition to these inner courtyards, outdoor garden areas, the restaurant, sports areas and thermal health centers are directly connected.

The elliptical surfaces which define the architectural language of the project consists of parabolic-hyperbolic surfaces. These surfaces were produced by the computer-aided F2F (File to factory) system. All lower steel construction and top coating material was applied in this way. In addition rain water is collected from the extensive roof and the inner courtyards and used in the landscape watering. The cooling system is obtained by sea water.

The building parapets were constructed with STO Ventec panels and STO products were used in the final coating application. In the facade system, Akzo Nobel painted Linea Rossa Aluminum joinery stytem is used.On the roof, an extensive green roof system is used on the steel structure.

The design, directly interacting with the sea , on the other side incorporates the cooling effects of the northern winds  in the summer period of the Çeşme region through the inner courtyards.  The shadowy areas created by wide terrace-garden areas are also passive climatic measures. Rain water is collected from the extensive roof and used in the landscape watering. The cooling system is obtained by sea water.

A Green Roof build-up reduces the water run-off to 50-100 %. The remaining water flows off with a time difference. So, with Green Roofs, it is ensured that the rainwater remains in the natural water cycle thereby reducing sewer cost.

A Green Roof helps to filter the dust particules in the athmosphere. The nitrates and other environmentally harmful substances on the air or the rainwaters are absorbed.

Due to the soft plant level of Green Roofs there is sound absorbtion instead of sound reflexion. Moreover, the sound insulation of a building can be reduced up to 8dB.

The surfaces of green roofs improve the microclimate by cooling and humidifying the surrounding air. In addition the plants capture solar energy, extract carbon dioxide from the air, and combine it with water to produce organic substances. Through this process, plants release oxygen which guarantees more purified air.

Thermal insulating green roof build-up with official property values are allowed to be added to the conventional thermal insulation. Due to this special build-up, the building owner saves up to 50 % of the energy cost.

– Natural Habitat for Animals and Plants

At least a part of green surfaces which were sacrified to building developments can be compensated by landscaped roofs, thereby reducing the quantity of sealed surfaces and encourage limited wildlife development.

-benefits in terms of building physics thanks to rear ventilation of the facade (humidity,sound and thermal protection)